Thursday marked a landmark step for Project Brave with the launch of the ‘Pride Lab’ support network that aims to accelerate the development of Scotland’s best up and coming coaches.

Designed by Scottish FA Performance Director Malky Mackay – as well as national youth team coaches Brian McLaughlin and Scot Gemmill – the Pride Lab programme will see the respective Heads of Children’s, Goalkeepers and Youth from clubs up and down the country invited to a series of sessions designed to stimulate debate and discussion. 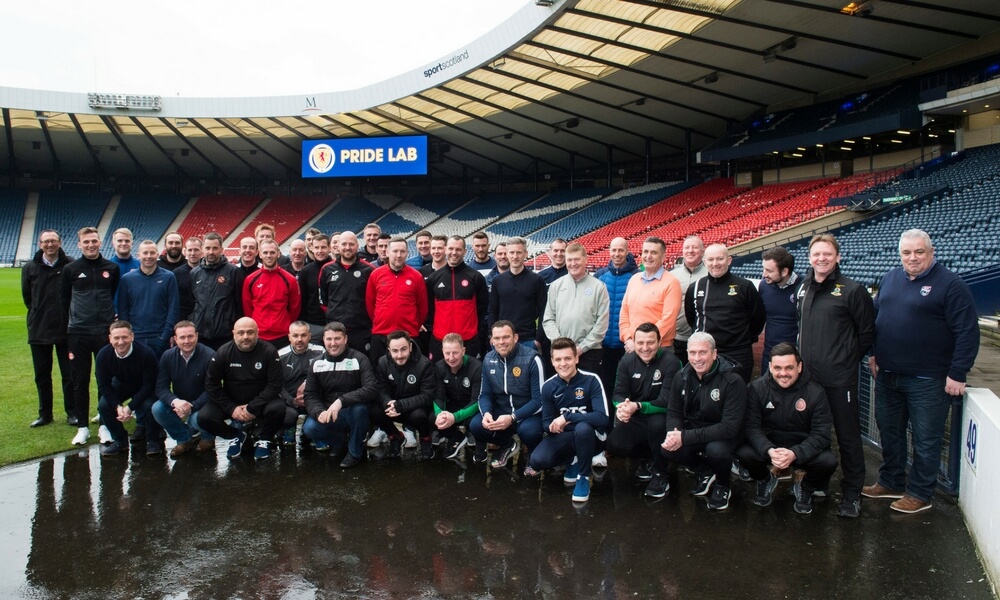 Mentorship is at the heart of the scheme, with a range of experiences and masterclass opportunities to follow throughout the year.

With a substantial investment from the Scottish FA offering proof of their commitment to raising the bar in the field of Coach Education, Mackay was on hand to explain the thinking behind the launch day and the events that follow.

Malky, can you explain the thinking behind the Pride Lab initiative?

Thursday was the launch of our elite coaching course. Through Project Brave and Club Academy Scotland, clubs have been asked to hire certain staff – a Head of Children’s, Head of Youth, Head of Goalkeeping and Head of Academy. Within the Scottish FA, we’ve decided that we need to help mentor our younger coaches and this was the start of the Pride Lab year. We’ll meet four times like this and split into three areas. Jim Fleeting will look after the Heads of Children’s. Donald Park will take care of the Heads of Youth and Fraser Stewart the Heads of Goalkeeping. Brian McLaughlin and Scot Gemmill will oversee everything. Together we’ll share ideas, talk about the issues within our respective roles and the challenges that lie ahead. Together we can find a better way for them to not only mentor their other coaches but also their players - so that in 10 years, when those young players become professional players, they can grow into Scotland players. We were lucky enough to be joined by Alex McLeish and he was right in what he said to the coaches who were present. The responsibility they have on their shoulders if huge, because they have the next batch of Scotland players. The responsibility is on these guys to challenge themselves, educate themselves, seek out best practice, to listen, to understand, to be mentored. Along with the rest of the staff, I feel passionate about the need to help these guys help themselves. Over the year our coaches will go out to visit them, at least twice, and by the end those three groups we’ve talked about will have a bigger toolkit to help their young players with.

On top of the sessions at Hampden, what else can participants expect?

There are a variety of experiences on offer. The Heads of Academy from Project Brave’s Elite section will come with us to eight events and, over the year, every one of them will get experience of an international camp. Was another example, we’ll take 20 Heads of Youth to Benfica this year for a couple of days. From our side, there has been a huge investment in this, going into elite coach education in this country. I want to help our coaches become top coaches. Our masterclasses will play a part in that.

Talk us through the masterclasses. You’ve had one already with another on the way…

We were fortunate to have a two-day event on the art of defending, with contributions from Sean Dyche, Dick Bate, who is the best coach educator in England, and Fabrizio Piccareta. In a couple of weeks we’ll focus on attacking with another two-day masterclass, this time involving people like Eric Black, Henrik Larsson and Kenny Dalglish. They’ll come in and share their experiences and know-how. I’m determined that we scour the globe to put the best possible quality of guests in front of our up and coming coaches. Gemmill echoed Mackay’s sentiments and talked up the importance of creating a culture where coaches feel able to share honest accounts of their day-to-day challenges and work, rather than offer up what they’d consider to be a perfect scenario.

Scot, what is your take on the Pride Lab launch?

It’s a new concept for the Scottish FA’s Performance and Coach Education departments, to try and support the people who are working day to day in the clubs. They’ve got hugely important jobs and we want them to share knowledge and be willing to help and support each other. Obviously there are rivalries between the clubs but there’s a huge financial gap between us and some of the countries we want to compete with, so for us to really push on we have to come together and that’s the idea behind Pride Lab. We want to make sure it’s specific to their jobs. It’s easy to say ‘we do this and you should do this’ but, underneath it all, we need to be honest and deal in realities. I think setting the environment is key to this. It can take a big person to say ‘we are struggling in this or that area’. At the core of this we will meet four times within a calendar year but how it evolves on top of that will be dictated by the people who attend, how they ask for mentorship and support.

“We’ll be directed by how they feel we can help them.”