As an occupational therapist with NHS Forth Valley, Julie Cunnell is all too aware of the effects of struggling with your mental health alone. Despite the Scottish Government estimating that one in three people per year suffer from mental illness, it remains an issue that many in society are reluctant to discuss.

“As health professionals, we often hear phrases such as ‘men don’t cry’, ‘pull yourself together’, ‘if I admit I’m struggling, I must be weak’.

“Thoughts and views like this prevent people from doing the very thing that will help them – to talk.”

However, initiatives such as Stenhousemuir FC’s Warriors in the Community Mental Health Football Programme are playing their part in breaking down the stigma surrounding mental health. Now in its third year, the sessions at Ochilview play an important role in each participant’s own personal battles.

“The aim of the project is for football to help in people’s recovery, as it can help to manage symptoms and can radically improve the quality of people’s lives,” said William Hoggan, head of community football at the club.

“We want to offer ‘Football for All’, and this programme allows us to deliver a fun and relaxed football session in a controlled and safe environment for adults with mental health issues.

“We want them to feel part of the football club and feel part of the community. They wear the club badge in training and on match days, and now take part in the national Scottish FA Mental Health and Wellbeing Football League, which takes place once per month across the whole of Scotland.” 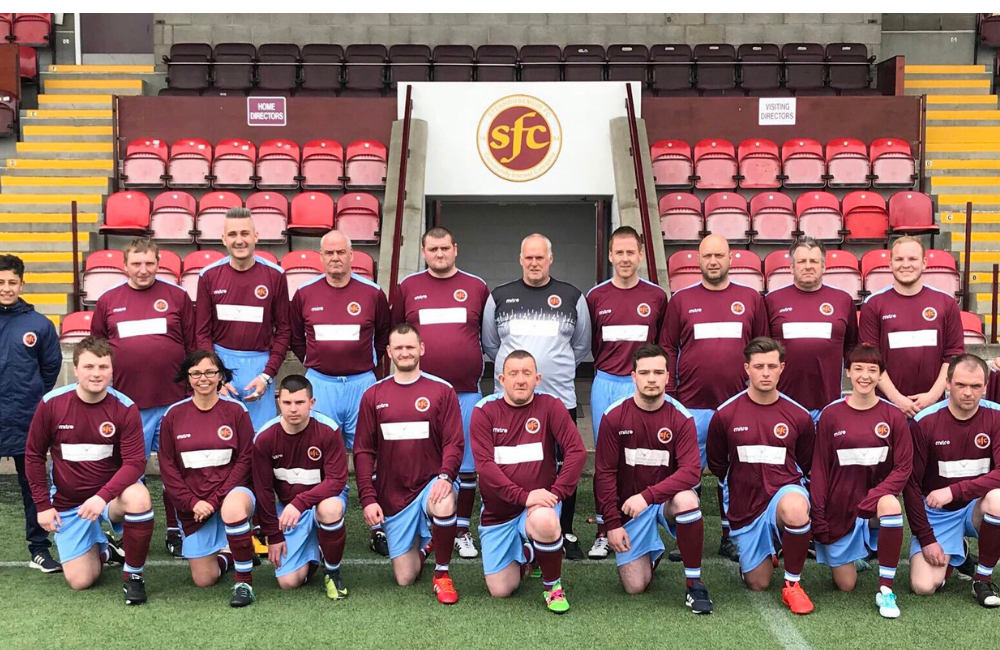 With the work of grassroots heroes across the country being highlighted as part of UEFA Grassroots Week, the impact of the programmes with which they work is also worth celebrating. For Cunnell, the effects of the initiative on those participating are clearly visible.

“Football can provide an opportunity to externalise emotion in an appropriate and healthy way, which traditionally can be something men find difficult,” she said.

“Being part of a team can provide people who are traditionally marginalised and socially isolated with a sense of identity and belonging, and wearing team colours on match days brings the team together through a shared interest.

“We have also recently been given funding to put together a boot bank, which gives some of the players who may not be able to afford this otherwise the chance to wear professional boots during training and match days.”

Hoggan is also a strong advocate of football as a tool for social inclusion, with the programme open to all ages and genders in the local community.

“For many players involved in our programme, the main draw is football and becoming part of a football club,” he said.

“They also wanted regular physical activity – they want to get out the house, have a better social life and to meet new people.

“We try and break down the barriers by creating good relationships with the participants and making the session as fun and enjoyable as possible, with a mixture of competition and development.”

The programme has made a significant splash in Scottish footballing circles, taking home the prize for Best Community Football for All prize at the 2018 Scottish FA Central region’s Grassroots Awards.

Hoggan is hopeful that the success shown by the Stenhousemuir initiative will lead to similar programmes being established nationwide, as grassroots football continues to make a real difference to those suffering with mental illness.

For our Mental Health Football Programme that we deliver twice weekly

Well Done to everyone who won an award on Tuesday & Good Luck for the @ScottishFA National Awards pic.twitter.com/t5bLttP3pi

“All community clubs in Scotland with a strong community set-up and strong engagement in their local area should really consider setting up their own Mental Health and Wellbeing Football Programme,” he said.

“Without exception, our current group members have reported significant improvement in their physical and mental health whilst attending our football group.

“It’s also great for the services involved to work in partnership, as we have strong relationships with NHS Forth Valley, Bellsdyke Hospital, Caledonia Services and Woodlands Resource Centre in the Forth Valley area.”

Cunnell is also hopeful that clubs at all levels of the game will follow Stenhousemuir’s lead.

“Football is the national sport. It connects millions of people around the country regardless of age, colour or background,” she said.

“This can be harnessed to reach out to those in our society that struggle to express themselves in “conventional” ways, such as talking therapies, and those for whom medication is only part of the process of recovery.”

So what would Cunnell say to any prospective participant, perhaps inspired to get involved by UEFA Grassroots Week?

“The focus of our group is not to win the World Cup but to decrease isolation, provide mental health support, structure, routine and improve fitness levels.